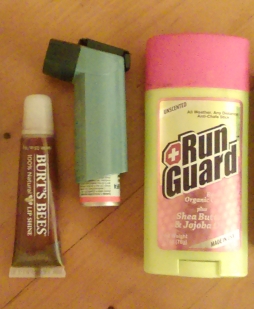 This is a cautionary tale of pre-race preparation gone wrong. On the morning of last year’s marathon, I deviated slightly from routine to both comic and painful effect. I hope others will learn from my mistakes.
******
CHANGE NOTHING. That is the Race Day Rule that trumps all others.

No new shoes, socks, shirts, sunglasses. . . .Anything that touches the body should be road tested to avoid blisters, chafing, and any other attacks on our largest organ.

No new gels, gummies, or Gatorade colors. Go with what you know to minimize gastrointestinal surprises, which, as regular readers know, is often at the top of my mind.

And for goodness sake, DO NOT change race prep rituals.

While not a seasoned race participant, I have enough “yay, you completed” medals to have a general sense of how to get to the starting line. With the aid of reminders strewn and taped all over the house (lip gloss! inhaler! check train schedule!!!), this is what has worked for me:

Screech! Rewind to “get dressed.” At the last minute, before the 2013 Chicago Marathon, I decided to pack my running clothes and wear my post-race clothes instead. This small, unnecessary change snowballed into a chain of mishaps.

The nearly forgotten shoes
I wore floppy sandals so I would not forget to bring post-race foot liberation. Instead, I almost forgot my running shoes. Thankfully, I realized this before I was too far from home.

The nearly missed train
Set back a few moments by the shoe problem, I leaned in, shifted up, and pedaled like mad. Oh no! The roar of the inbound train hit me a minute from the station. I banked sharply around the corner and scanned the bike racks, half a block away. I skidded to the best spot then dug deep for the calm concentration needed to corral frame, wheel, and bike rack within a snug U-Lock on the first try–kind of like the two wheeled version of parallel parking.

Nailed it! I then charged the turnstile, my transit card out like a lance. Thud! Out of order. The station shook as the train approached. Move to the next turnstile. Out of order. !!!???

An older man was fumbling with the lone functioning turnstile. Behind, I squirmed with suppressed impatience: “Respect your elders! Your emergency is not his crisis!” When he, then I, finally got the green light, I (politely) pounded the stairs past him. I heard my knee crunch. “Hold the train!” We squeaked in. “Bing Bong–the doors are closing.”

The re-injured knee
I’d won the race against the train, but at an expense. My flip floppy sandals, while perhaps ideal for post-race swollen feet, were not at all appropriate for flying up the stairs. After my heart rate slowed, the static from my knee increased, echoes of old injuries. The silly thing was that I could have waited ten minutes for the next train, or even twenty for the one after. Knowing my tendency to cut things close, I always build in a buffer.

The wrong turn
My destination was not the marathon gear check, but rather Jones College Prep, just a few blocks away from the start line. One of the perks of raising money for Girls on the Run (yay!) is that they provide off-site gear storage, food, and other merriment so you don’t have to deal with race day mayhem.

When I emerged from the subway, I was disoriented.Even though Jones is about 10 steps from the stop, I ended up walking in the opposite direction for almost 10 minutes. Granted, it was still dark out, but since I still get turned around in my own neighborhood after 13 years, I should have checked a map. Good thing I made that early train. 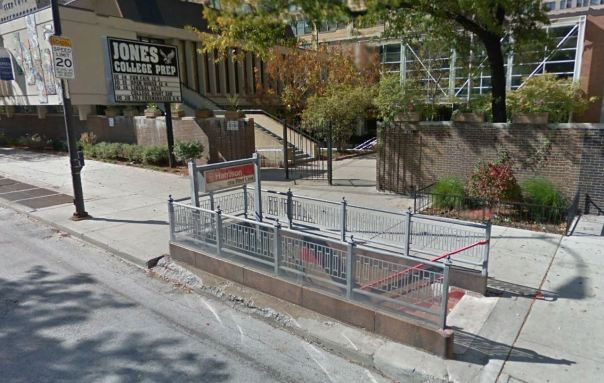 It takes a special kind of spaciness to miss this connection.

At GOTR race central, I was thrilled to see Mindy volunteering at the food table. She was an acquaintance (now friend, and you will soon understand why) from my son’s school. I headed to the bathroom to change. As I dug through my stuff, a slow burn of panic crept from belly to fingertips. “Here’s the damn lip gloss, but where’s my bra?!”

Though I am no Victoria’s Secret model, my unfettered boobs can’t manage 26.2 miles of jiggling. I sidled back to Mindy, who is of similar stature, whispered my problem, and, er, asked if she happened to have a spare bra, or, if, er, I could borrow hers. She gamely offered the one off her back, but it didn’t quite fit. Time was ticking and the room was emptying of runners. Emboldened by the ridiculousness of the situation, I blurted out my predicament. Moments later, a GOTR staffer ran to me waving a sturdy, black bundle of hope. A runner from out of town had an extra bra in her luggage. It fit! The race was on.

The narrow escape
I could have, and should have, left the building through the same doors I entered. Instead, I saw a door leading in the direction to a courtyard I recalled using as an entrance last year. I proceeded, followed by an ominous click. No choice but forward. Past more doors that locked behind me. I started to get nervous for the umpteenth time of the morning. I finally reached the courtyard door, which opened into sunshine. . . and a closed gate.

This was a real pickle. I had no phone number for GOTR staff. I guess I could have flagged someone down and asked them to walk the half block to the entrance and then search for the GOTR crew. . . .but that seemed a bit much, especially since I was already wearing a stranger’s bra.

I finally decided to take inspiration from having witnessed countless children wriggle through fence openings half their width. First one leg, then a side contortion, sucking in, one butt cheek at a time, perpendicular limbo, grateful for flexibility. . .Freedom. 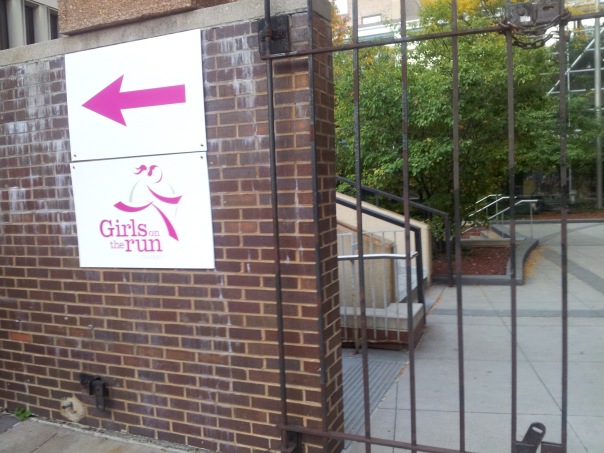 The extra mile
My race went poorly, much worse than the year before. By about mile 15 my knee was hurting so much I feared I would not make it, but I scraped along. So this is why just completing a marathon can be a big deal for people!* More than five hours past the start, I limped across the finish and made the slow, unsteady walk of shame and pride to the family meeting area. Which turned out to be an agonizing mile away! I should have studied the race map more carefully to arrange an earlier exit from the gauntlet. But this final goof seemed a fitting end to the day.

I decided to take this year off, but will be back in 2015 with my own bra. In the meantime, learn from me:

*It’s not that I think a marathon is a trifling thing, but the year before it didn’t feel like an accomplishment. “Oh, anyone with a moderate amount of baseline fitness can shuffle along for 5 hours!” Erm, maybe not.